For this year’s second race in the WA state downhill series the club rescheduled to race at Golden Grove at the same track as last year. This meant that for the first time since starting racing I would already be familiar with the track, leaving me concentrate on riding the same or similar lines, just faster; instead of learning a track from scratch. 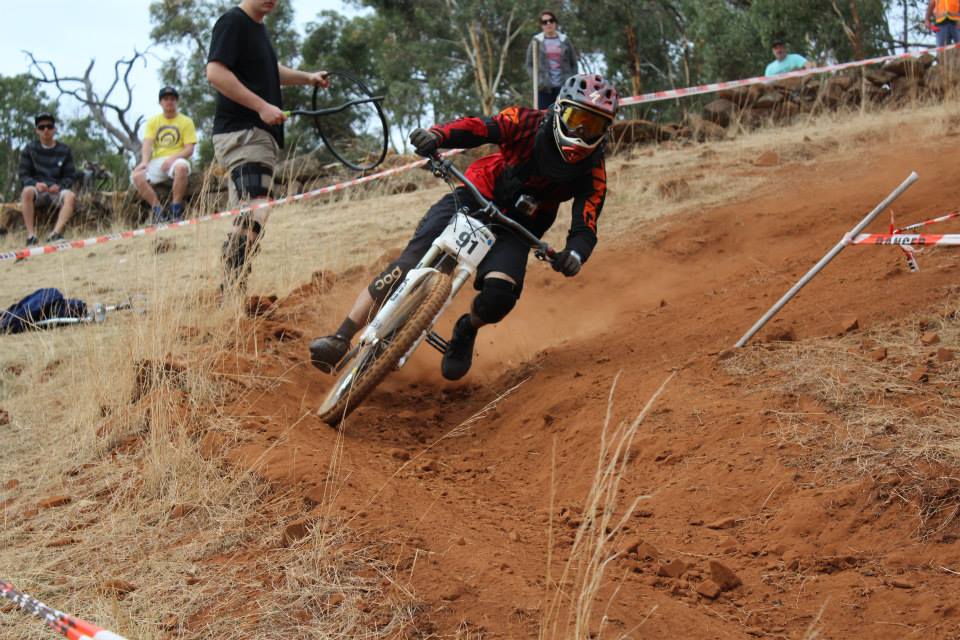 After going well in practise, race day just wasn’t the same with bike problems and a few little mistakes making for two disappointing runs. Quite a few other racers had bad luck with one of the top guys having a big off, taking some time to be stretchered off the hill!

Practise on saturday started off slow and groggy for me, but I soon loosened up and started committing to corners and letting go of the brakes in sections where I was tight and sketchy last year. By the end of the day, I had done two runs from top to bottom at a good pace, leaving some room to push it further on race day, both of which looked like I was a good 7-8 seconds faster than my full-on race run from last year.

Over a 2 minute track that was very encouraging and I was eager to step it up another few seconds come race day, something I often find happens only when you hear those beeps!

For the qualifying run I went full out, eager to leave nothing behind, but about a third of the way down the course I felt like I had a flat tyre and the bike wasn’t pedalling very well, if at all. Trying to feel out what was wrong I kept on, but my concentration wasn’t there and I made some minor mistakes, losing speed in sections where we have to go flat out. Coming down with a time of 2:09.9 was somewhat surprising, considering how much time I’d lost to myself on the track.

A quick look at the bike showed that the rear derailleur (the bit that changes gears) had lost tension from its spring, so my chain was all floppy, constantly coming off and going back on, requiring a few pedal strokes to get any power through at all. I decided I didn’t have time for repairs and went back up to go down as best I could for the race run.

Unfortunately during his qualifying run one of our top guys, Luke Ball, had a big crash at the top of the run, breaking a collarbone. Due to the steep hill and rough access roads it took over an hour to drive him down from the very top, what must have been quite a painful drive. It’s a shame for Luke as he had made the top cut at a World Cup event just the week before in extremely difficult conditions, only to crash out at a local track. Going that fast will always be risky, no matter how good the rider is.

My race run didn’t go well at all. The gamble of running the bike as it was didn’t quite work out and I lost my chain numerous times, almost coming off the bike once or twice. A big mistake near the top also didn’t help. It was somewhat embarrassing not being able to pedal properly in the final open-field section of the track where most spectators were gathered, the majority yelling for racers to pedal and go faster, but what can you do?

Finishing with a disappointing time of 2:10.670 was an anticlimax to the weekend, but in hindsight is a good result, a below average race run that ended up 7 seconds faster than my time last year. The feeling of progression in one’s riding is definitely satisfying and gives me encouragement that there is a long way for me to push my own limits, in good time!

The next downhill race is scheduled at Nannup, 3 hours south of Perth, hailed as the gnarliest, steepest and roughest track in the state. Having never ridden there I am eagerly, though nervously, awaiting to push myself and my bike down the hill without having to push UP  !