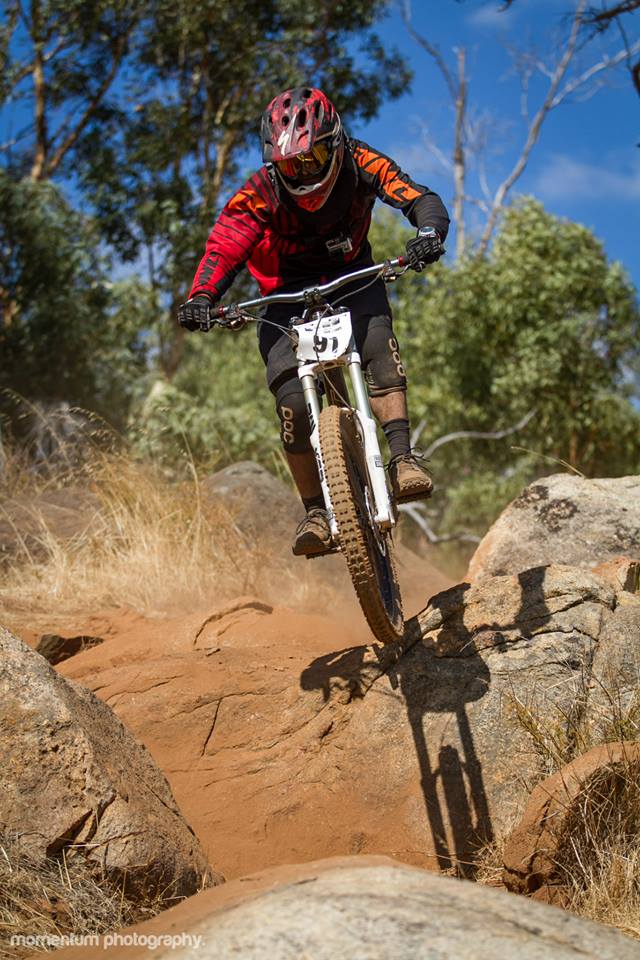 I often get surprised/impressed replies when I tell friends that I race downhill, as if there is some special skill requirement to take part. Whilst very kind to one’s ego the truth is that pretty much anyone can and does take part in the WA state downhill series. Regulars include 10 year old kids, rolling down the tracks on hardtail bikes to fast talented elite riders who compete for a top 10 spot at national level (and for Australia the national level is close to world class). Also this time we once again had the fortune of 5 time world champion Sam Hill racing over the weekend!

Everyone has their own goals, though. Last year, being my first season, mine was not to come last in the lower ‘Sport’ class, which I managed by quite some margin. Others may be aiming at winning their respective class or going for the overall win. Whatever their goals, everyone could call themselves a ‘racer’ and be totally correct!

At what point though can someone really consider themselves to really be part of the action?

With 3 main classes to compete in (Sport, Expert, Elite) one might say ‘you have to be competitive in the top class to mean anything’, but that would be missing the point. Downhill may look like reckless speeding down a mountain using big bikes and forgiving suspension, but it is a much deeper sport than that. A complicated mix of talent, technique, finesse, precision and all-out bravery is required to be competitive at the top and I find myself lacking in all of the above, but I am by no means a novice or a straggler!

Downhill is somewhat different to many other forms of racing. Take track racing for example. Anyone with basic driving skills can get into a car and drive around a race track. They may be ten times slower than a professional driver, but the track itself will not pose any difficulty to the driver.

In downhill the actual race courses have features and obstacles such as difficult rocky sections, steep drops and jumps which a novice rider would simply not be able to ride, let alone race. Even some of the ‘B lines’ (easier but slower routes around difficult technical features) can be very challenging to impossible for someone with no experience. In light of this anyone who has mustered the guts to compete deserves a good deal of respect!

Therefore each race course has its own “requirement” of ability to be racing он the same track as the top guys. For me the real racing starts when simply riding the track is no longer a challenge, the focus is now to apply oneself to going as fast and clean as possible over every inch of the course.

For this year I will try and do a short post for every state downhill race, which may or may not include pictures depending on how the weekend went!
The first round for this year was held at Perth’s Goat Farm mountain bike park. The great thing about it, is it’s less than 30 minutes from central Perth, the not-so-great thing is there is virtually no shade and everyone has to push themselves and their bikes up the hill to practise and race. For non supremely fit people, such as myself, it’s very easy to overdo practise day and be totally drained come race day. With a track time of around 2 minutes at the sharp end of the field the actual final runs are not too demanding, but every tiny mistake will cost dearly.
The track itself was one of the easier tracks to ride, with two rock gardens and a rock drop forming the main challenges. Going fast, on the other hand, was very difficult. With no rain since late November, other than a quick shower at some point, the surface was loose dusty and blown out. Flat and off camber corners gave us hell when attempting to go any faster than walking pace and lines were constantly changing. Following the rider in front was a no no, unless you were an inch behind or didn’t mind riding blind.
I took my seeding run quite easy, but it was evidently a little TOO easy as I came almost last in my class! Seems like going for a completely safe seeding run is not an option like it was in the lower class last year!
Race run went pretty good, other than the start, where I wasn’t quite aggressive enough and lost my line several times forcing me to take some evasive lines. The two rock gardens would felt like my fastest of the weekend, significantly quicker than I was practising, which gives me good confidence for the upcoming races.

I felt like I held back too much at the bottom section of the track where the speed picks up and the turns and jumps are blind; I guess I was overly keen to get a decent result for this year’s first race rather than really go all out, so hopefully I can open it up a bit more next time! With a time of 2:04.959 I placed 11th in Expert, in the top half of the overall. Breathing a sigh of relief that I didn’t go in over my head I am now eager to go better!
All in all a fun weekend of racing with plenty of spectators!
Next race has been scheduled at Golden Grove, where I had lots of fun last year, so I can’t wait for that!