For the third race in the state series this year the club finally came back to one of our favourite venues in the pine forests at Wellington Mills, after a year’s break and a new-ish track. Not only that, it was the first race where we would get shuttled up the hill, instead of having to push our bikes up. All this combined for the highest attendance this year, with everyone excited to ride the new tracks.

What we didn’t look forward to was the torrential downpour on race day, making for some pretty miserable conditions, the kind that makes you question why you’re there in the first place..

In the past I have struggled to do well in such conditions, feeling good on the bike but ending up a long way off the pace. In light of that I was considering not going to the race at all, given how poorly my year had started with an 8th and a 12th, I was not looking forward to getting wet, muddy, cold and possibly coming dead last. I decided to go anyway and just ride for fun.

Arriving at Welli Mills on Saturday for practise the track conditions were slippy, but not too bad, as more people rode down the track got better and better. I had put my worries out of my mind and was having an absolute blast, coming down the hill and jumping straight onto the next shuttle, barely having enough time to grab a quick drink. By the end of the day I was riding confidently and hitting lines I was very happy with, keeping up with people much faster than myself.

Saturday night was not quite as rosy, with constant, heavy rainfall all night long and well into the morning. The track was now extra slippy, rutted and with many more shiny roots exposed. Some of the new sections of track had become barely rideable. We would get cheered, just for getting through sections without crashing. 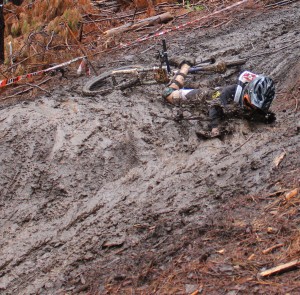 Coming down on my first timed run (qualifying) I made a few big mistakes and came to a stop at the bottom, just before a long pedalling section, so I knew I had some time to make up if I could keep it together. 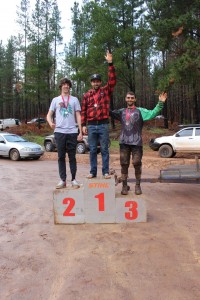 s our placements were read out it turns out I had the 3rd quickest time in qualifying, I had never been ahead of so many people before! Nerves set in as I got excited of the prospect of achieving a long term goal of mine, well before I thought I’d be up to it. I still had to make it down and not slouch, I know if I was the 4th person after qualifying I would be pushing extra hard to get that podium.

I started my run fairly aggressively and made a pretty big mistake over a drop, which almost got me off the bike with plenty of track to go. I did my best to stay calm, but remain agressive and managed to execute all the ‘lines’ I had been practising, then made another mistake at the worst section of track, almost stopping for a second. Feeling a bit deflated, but still giving it everything I got over the line and felt good, but the live timing system was broken, so no one had any idea how they’d done.
Speaking to fellow competitors it seemed the majority of us didn’t manage to stay on their bike all the way down, so I was quite happy to have at least done that and waited as the podiums were read out, finally hearing myself being called out – I had gotten that 3rd place!

As racers we all want that awesome run, fast, smooth, without mistakes, followed by a great result – it leaves no doubt you showed your best and did well. Sometimes runs like that don’t work out, you end up on the wrong side of half a second, plunging you 4 places down. On this occasion what didn’t feel all that great turned out to be good enough.. I’m pleased to not have come off the bike all weekend and to have kept my cool in conditions where even the most skilled and experienced riders were having difficulty putting their best down. I look forward to more racing and hope to back up and improve my results in true flat-out conditions!

Here’s how it went down: